Mr D had minor surgery on his eye last week.  It was an out patient procedure but we went to the clinic every day for 3 days, skipped a few days and back to the clinic.

It's been rough on him, not too much pain but a lot of discomfort, which is getting better each day.

Eye drops, eye drops and more eye drops.  He was on 4 different drops, two of them 4 times a day.

I just hope they fixed his problem and he will have better vision.

He was diagnosed with Map Dot Fingerprint Dystrophy many years ago, it finally got so bad surgery was needed.

I am happy to report, it's been a long week but he's recovering nicely.

On our way home yesterday he felt well enough to stop for breakfast.  We were in Pasadena so we stopped at our favorite cafe and enjoyed a late breakfast with some very good coffee.

Also known as epithelial basement membrane dystrophy, map-dot-fingerprint dystrophy gets its name from the unusual appearance of the cornea during an eye examination.Map-dot-fingerprint dystrophy, which usually develops in both eyes, usually affects adults between the ages of 40 and 70, although it can develop earlier in life.
Most often, the affected epithelium will have a map-like appearance: large, slightly gray outlines that look like a continent on a map. There may also be clusters of opaque dots underneath or close to the map-like patches. Less frequently, the irregular basement membrane will form concentric lines in the central cornea that resemble small fingerprints.
In Mr D's procedure they used a laser to burn off the 'fingerprints'
Hope to get by for a visit later today.
💗
Until Next Time

Email ThisBlogThis!Share to TwitterShare to FacebookShare to Pinterest
Labels: Family

We had rain, gusty winds and loud thunder yesterday, needless to say Buddy and Bitsy were nervous wrecks.  Buddy spent most of the day in my chair, snuggled between me and the chair arm while Bitsy was on the ottoman covered with my blanket.  They do not like bad weather. 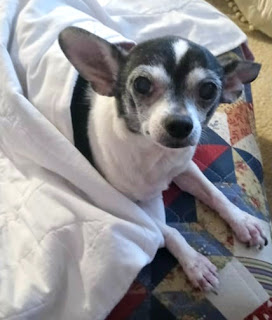 She poked her head out long enough for a picture!

Today is Bitsy's 11th birthday.  She's getting so much gray, a little old lady for sure.

I've been thinking about a special word for 2022, and though many have passed through my thoughts, not a one has been 'The One.'   It's okay, I'll just wait until the right one comes my way.

I did see this on facebook and it's really making me think . . .

And then later today Peggy (youngest daughter) posted this  . . .

Psalm 62:5
My soul, wait silently for God alone,
For my expectation is from Him.
Until Next Time

My name is Mary

Pray for the Peace of Jerusalem